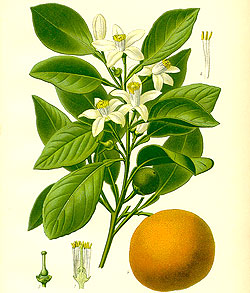 Neroli Oil has been widely used across the world for centuries. Derived from blossoms of the bitter orange tree, the sweet, floral smelling oil has many benefits and is commonly used for aromatherapy and therapeutic practices. It is extracted from the small white flowers of the bitter orange tree by water distillation due to the flower’s fragile state. The appearance of the oil is a pale yellowish color with a watery feel. This oil is the main fragrant ingredient in more than 12% of modern quality perfumes because of its distinct smell, and it’s ability to blend well with citrus, lavender, and many other oils.

The oil was given it’s name in the 17th century in order to describe it’s floral essence. The oil was made popular and fashionable by Anne Marie Orsini, the princess of Nerola and duchess of Bracciano. She introduced the use of the bitter orange tree fragrance by using it as a perfume during her baths and for her gloves.

So, Why Use Neroli Oil?

Other than use of it’s floral fragrance, Neroli oil is used several ways to soothe and heal the human body. Use of the oil has not been reported to have side effects, such as irritating skin or sensitivities, and is non-toxic. The oil has been traditionally used for aromatherapy and massage due to its soothing effect on the body’s nervous system. The oil is also used to heal thread vein scars, increase blood circulation, and to relieve anxiety and tension in the body. Neroli oil in burners and vaporizers are excellent for headaches, shock, insomnia, tension, and vertigo. Adding the oil to a bath or using it as a massage oil is a popular common use because it rejuvenates the skin, helps with insomnia, and is believed to help ease diarrhea, upset stomach, colitis, heart palpitations, neuralgia, headaches, and anxiety. This essential oil can also be mixed with various creams and lotions to help stimulate skin cell growth, prevent scarring of the skin, and battles the appearance of stretch marks and other scars (read more about Essential Oils Uses here).

What Are Some Health Benefits of Neroli Oil

Overall, Neroli oil is widely known and used for several health and body benefits, as well as for its distinctive and sweet floral fragrance. Although the oil has been used for centuries, check with a doctor before using herbal remedies for disorders and illnesses.